A team lead by HDES and consisting of Lencon Engineering and AOW Consultancy has demonstrated a full prototype of an oxygen cool gas generator for breathing applications. This prototype was developed in the framework of the EVE MIT co-operation project sponsored by the Province of Zuid Holland. In the EVE project HDES developed the oxygen producing charge for the oxygen generator and designed the overall system, including the activation. Lencon focused on designing a suitable housing that kept the outside wall cool enough that it can held by hand, an important feature for easy use by patients and professionals. AOW Consultancy worked on the medical aspects of the oxygen generator and set up a plan for the certification of the device.

The two year programme included many tests of oxygen generators to further develop the formulation and the ignition. Several different thermal protection concepts were analysed and the best ones were tested in a test set-up. This all led to a prototype with all components functional. Several tests with this prototype were completed and its functioned well, marki 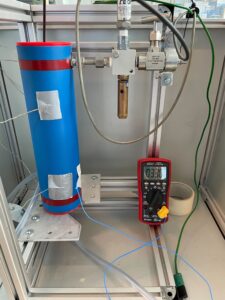 ng the successful end of the EVE development.

The next step will be to develop the EVE oxygen generator towards an operational product for customers. Discussions with potential customers and  investors are under way to take this next important step towards a certified and production ready Oxygen generator.