To test Cool Gas Generators, HDES has designed and built its own test equipment, consisting of there parts: a mobile  re-enforced test cell, a data acquisition and control system and the actual test-set-up itself. Previously, equipment used in other projects was used for testing Cool Gas Generators. Based on this experience HDES designed a new more modular test set-up.

The test-set-up is a strengthened and modular Cool Gas Generator specifically designed for testing grains, filters and igniters. It is equipped with multiple parts to allow sensors to be attached. Due to its modularity, it can be quickly adapted to different tests and this also allows rapid turn around when certain design solution do not work as expected in practice.

The parts manufacture of three units was performed by Stellar Space Technologies and HDES did the assembly and fit check. The test-set-up was then leak and pressure tested and the first hot firing took place in July 2021.

The test-set-up has now been commissioned and is performing well and will be used for many more tests in the future, 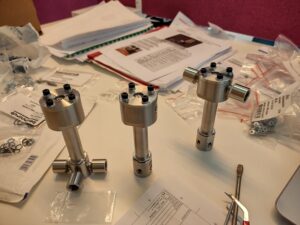