On the second of November 2019, at 1.50 hours, Proba 2 was in orbit for 10 years. The satellite is still active and functioning well despite that fact that it has outlasted its planned lifetime of 2 years 5 times.

On board of the Proba 2 is the Cool Gas Generator (COGEX) experiment with 4 Cool Gas Generators. Each Cool Gas Generator has a capacity of 40 liters of nitrogen. The generators were produced in 2005 and delivered for assembly in the same year. This was the last time the builders saw the experiment and were able to maintain it. COGEX was qualified for flight by its own test programme and by the qualification of the Proba 2 satellite. Prba 2 was launched in 2009 and the first Cool Gas Generator was activated from the ESA Redu ground station in 2011. A second one was fired in 2012 and the third one in 2016. The firings all went picture perfect and no degradation of the CGG’s was measured. The 2016 firing demonstrated 11 year without maintenance, of which 7 years in orbit.

One last CGG remains to be fired and this one will be saved until the end of the mission for an orbit lowering maneuver of the Proba 2. This to decrease the time that the in-active satellite, now space debris, remains in orbit. 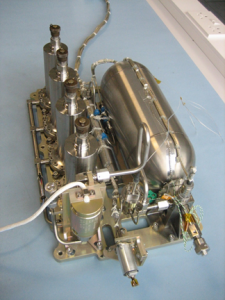 The Proba 2 COGEX experiment with to the left the four Cool gas generators, to the right the tanks is visible and below the thruster is visible. Between the thruster and the Cool Gas Generators is the pressure transducer.