HDES manages the COGEX Cool Gas generator experiment on board of the Proba-2. The COGEX consist of 4 nitrogen cool gas generators of 40 normal litres of which 3 are already fired and one is ready for a future experiment. The COGEX experiment was originally developed by TNO and Bardford Engineering and was delivered to ESA in 2005.

The PROBA satellites are little satellites that launched with Indian and Russian rockets in 2001 and 2009. The purpose of these satellites is two-fold, first conduction observations of the Earth (Proba 1) and the Sun (Proba 2), but also testing new technologies in space, such as experiments with gas generators. This year, PROBA 2 is  in orbit for ten years and has performed above all expectations.

The presentation about the Cool Gas Generator given by Berry sanders of HDES and Marco van der List of Bradford. The Cool Gas Generator could safely and effectively store gas which could be released any time you want. It was tested thoroughly on Earth before it was launched into space with the PROBA 2. There are four Gas Generators on board from which three already have been tested, so there is one left to activate. The plan is to activate the last generator at the end of the life of the satellite.

The pressure that is generated by the gas generator can be used to move de satellite or to inflate an inflatable structure. All test done with the Cool Gas Generators were successful and the results were as predicted. 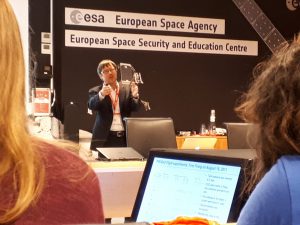