A team consisting of T-minus Engineering from Delft and HDES initiative has been awarded a subsidy from the Province of Zuid Holland to start the development of the VOLTA  rocket engine concept.

The VOLTA enige is aimed at the fast growing small satellite market where it can be used to transfer satellites from their initial orbit after a cheap launch with multiple satellites to their operational orbit with aminiaml burden is cost and mass. It can also be used to efficiently de-orbit satellites at the end of their life.

In this two year project, a first version of the hDES engine will be developed and tested. A second version, that might even be used in aspace demonstration will be built and tested at the end of the project. 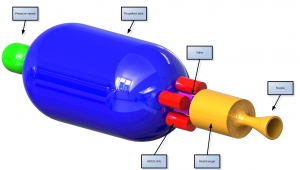